A Provocative Museum Places African Art on the Global Stage

CAPE TOWN — The Zeitz Museum of Contemporary Art Africa, which opened here last month in a reincarnated grain silo and is drawing around 3,000 visitors a day, appears set to become the dominant arts institution on the continent.

It’s already a controversial one, the target of competing and contradictory views. Zeitz Mocaa, as it is known, has been hailed as “Africa’s answer to Tate Modern,” and “a new chapter in South Africa’s history.” Archbishop Desmond Tutu, in a rare appearance at the opening ceremony, mimed a phone call from former President Nelson Mandela in heaven: “Yes!” Mandela told him. “This is what we were fighting for!”

At the same time, art devotees from Africa and abroad have criticized the museum as an elitist emulation of Western institutions, disengaged from local communities.

Both views have some validity.

The $38 million new museum houses the collection of Jochen Zeitz, the German-born philanthropist and former chief executive officer of Puma SE, who has been amassing contemporary work from Africa and its diaspora since 2008. The building’s simple concrete exterior and cut-glass-faceted windows give little hint of the spectacular cathedral-like interior, with 80 white-cube galleries over nine floors on either side. 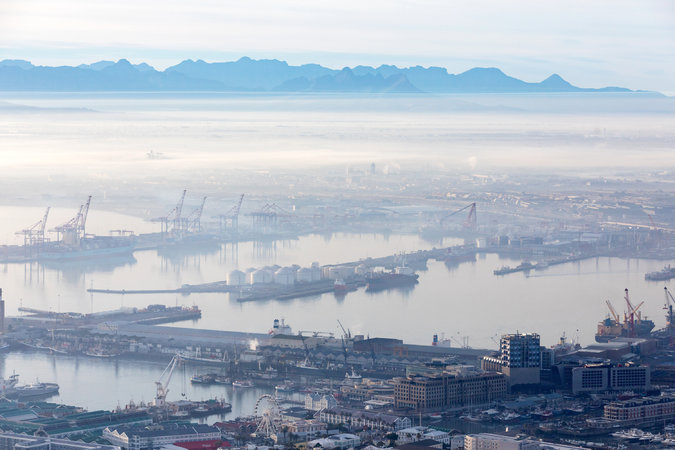 The view of the Port of Cape Town from the Zeitz Museum of Contemporary Art Africa. CreditIwan Baan

Thomas Heatherwick of London, who designed the building, created the ovoid atrium by slicing through 22 of 116 concrete tubes running from the top of the silo to its basement, where conveyor belts once shuttled millions of tons of grain to trains outside. Oliver Wainwright, The Guardian’s critic, described “a thrilling space of concrete cylinders that plunge from the ceiling like carved stalactites, through which stairs spiral and glass elevators glide.”

But some question the large sums spent on a private museum while the country’s public museums languish, as well as its location on one of the most expensive pieces of real estate in South Africa — the sprawling V & A Waterfront complex of shops and restaurants, much visited by tourists.

What they see inside is the representation of one man’s taste in contemporary art — although that man is not Mr. Zeitz. He is Mark Coetzee, the Cape Town-born curator who Mr. Zeitz hired to help him form the collection, and who is now the museum’s chief executive and director.

Leading early visitors on a hard-hat tour of Zeitz MOCAA in the spring, Mr. Coetzee explained that its mission is “cutting-edge contemporary, so the work is all made after 2000.” He added that the focus was large-scale and in-depth: “The one rule we made was to buy bodies of work. With very few exceptions, we have 40, 50, 60 pieces of every artist whose work we acquired.” 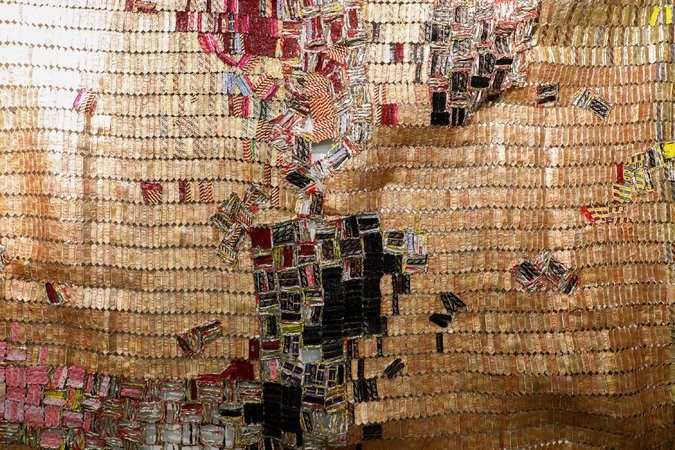 A sampling can be seen in the opening exhibition, “All Things Being Equal,” which is mostly a demonstration of some of the museum’s headliners: Wangechi Mutu (Kenya), Zanele Muholi (South Africa), Chris Ofili (United Kingdom), Glenn Ligon of the United States, and El Anatsui (Ghana) whose bold installations — made from bottle caps, aluminum, copper and other discarded materials of trade — alludes to the scars of Africa’s colonial history.

Mr. Coetzee, 53, has also staged early career retrospectives of the Zimbabwean-born artist/activist Kudzanai Chiurai and of the South African artist Nandipha Mntambo, known for her cowhide-covered human figures, molded from her own body.

Outside of the white-cube galleries, in the soaring atrium, a giant rubber dragon made from tubing, multicolored ribbons and an animal skull, by the South African Nicholas Hlobo, references Xhosa myth. In the underground tunnels that transported grain, the photographer Edson Chagas has recreated the Angola Pavilion that won the Golden Lion award at the 2013 Venice Biennale.

The prominence of photography and video in the collection — Isaac Julien’s nine-screen “Ten Thousand Waves” is also on display — has drawn criticism. Mr. Coetzee said he was aware that there were imbalances, as well as omissions, but that the museum needs time to develop a comprehensive collection

Over breakfast recently in London, where Mr. Zeitz lives part of the year, he described meeting Mr. Coetzee in Miami in 2007 when the curator was working for the Rubell Family Collection. Puma SE sponsored Mr. Coetzee’s show, “30 Americans,” featuring work by African-American artists of the last three decades. “We had a pizza together and I asked him why artists from Africa are so little represented, and why there is no significant cultural institution in Africa. I said, why don’t we do it?”

A year later they began forming a collection of contemporary African art. “This is not a private collection that I purchased for myself,” said Mr. Zeitz, 54, who looks more like a rumpled game ranger than a C.E.O. “We collected on a scale that you wouldn’t do privately because we always had the idea there would be a place somewhere in Africa where we would exhibit.”

Asked whether he had a budget, Mr. Zeitz laughed. “I had to somehow still be able to pay my bills,” he said. “But no, there was no budget in mind.”

The mission, Mr. Coetzee said, was to allow Africans to tell their own story. He acknowledged that there were still large gaps in the collection. “There are countries and areas where there are no art schools, no infrastructure and it’s hard,” he said. 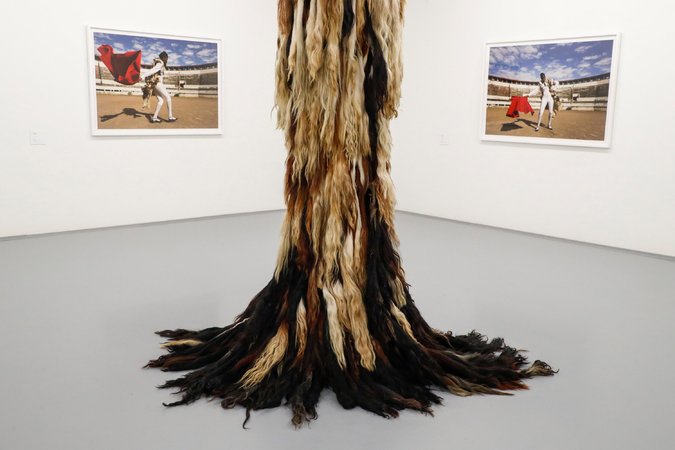 Animal skins are joined together to look like a tree in this installation by the South African artist Nandipha Mntambo. CreditNic Bothma/European Pressphoto Agency

He added that another goal was to make the work accessible to people who didn’t usually see art, with free entrance for visitors under 18 and, each Wednesday, for anyone with an African passport.

“Our public museums, through no fault of their own — they have no money — have not been accessible to people, even postapartheid,” Mr. Coetzee said. “What we have decided to do is to think very carefully about work that is experiential and evocative and really engages a broad spectrum of society. I do believe it’s possible to do that and still have brilliant work.”

Still, the tension between the founders’ philanthropic goals and the corporate reality is palpable. The museum sits in the newly developed Silo District at the Waterfront, which boasts apartment blocks, offices and shops. A luxury hotel (not designed by Mr. Heatherwick) sits above the museum itself. As The Guardian noted, “For an institution that is trying to be open and accessible to all, its upstairs neighbor is a painful reminder of the extreme inequality that still racks this city — a luxury playground for some, an impoverished slum for others — more than two decades after apartheid.”

Mr. Coetzee and Mr. Zeitz looked at spaces in other parts of Africa for their museum. When David Green, the chief executive of the V & A Waterfront, approached them, “it was actually ready made: They had a building and an architect; we had a collection,” Mr. Coetzee said. 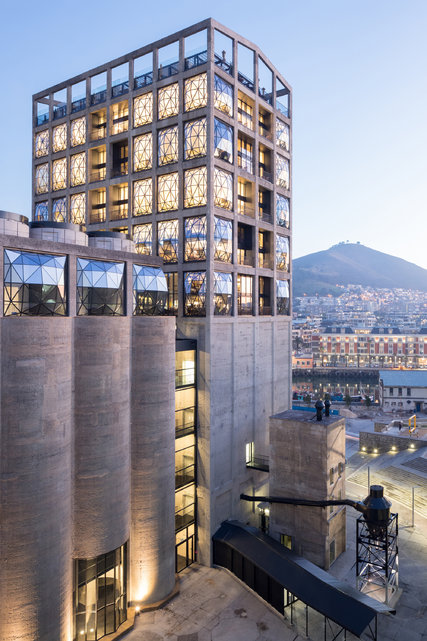 The Zeitz Museum of Contemporary Art Africa at nightfall. It sits on one of the most expensive sites in South Africa and has a luxury hotel at the top — a reminder of “the extreme inequality that still racks this city,” a design critic wrote. CreditIwan Baan

Mr. Heatherwick, though not a licensed architect, was well known internationally for the British pavilion at the 2010 World Expo in Shanghai, and his flaming caldron for London’s 2012 Olympics. (Several recent projects, including Pier 55, a $250 million project for Barry Diller along the Hudson River, and the Garden Bridge in London have since flamed out.) He had first visited the silo — unused since 2001 — 10 years ago. “I spent two days crawling through the silo, which had a monumental amount of bird poo,” Mr. Heatherwick, 47, recalled in an interview at his spacious London headquarters near King’s Cross Station. “Nothing came of a development idea the Waterfront had at the time, but I was fascinated by the place.”

The hollowed tubes were “rubbish for showing art in,” he noted, but “it was so idiosyncratic, such a spectacular tube-tastic thing, that we felt we shouldn’t knock this building down and land a modern art spaceship.” He added, “It felt like our role should be to amplify the power of that building.”

A deal was struck: The V & A Waterfront would provide the building and pay for the renovation and Mr. Heatherwick’s fees. Mr. Zeitz would give his collection as a lifetime loan, and contribute half to the initial costs of staffing and offices. The billionaire, who currently oversees a nonprofit foundation with Richard Branson to support the clean energy economy and the Zeitz Foundation for Intercultural Ecosphere Safety, will also provide an unspecified annual contribution for acquisitions over the next 10 years. The renovation budget of $37.6 million, is high for South Africa, but small compared to new museums internationally.

Mr. Coetzee did not disclose the operating budget, but said it would be comparable to “a midsize American museum.” 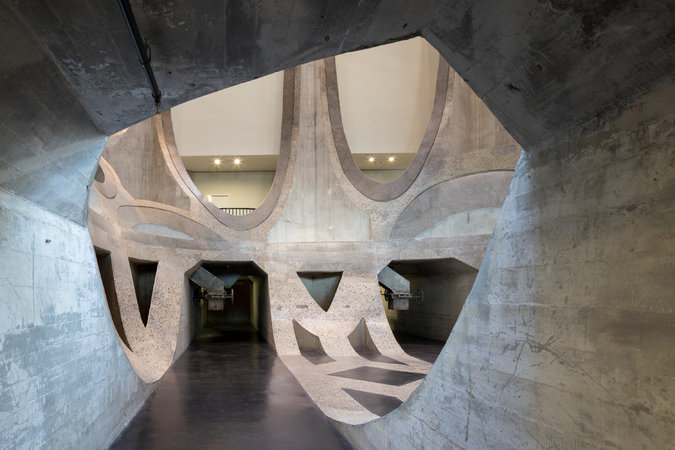 Thomas Heatherwick created the ovoid atrium by slicing through 22 of 116 concrete cylinders that plunge from the ceiling more than 100 feet. CreditIwan Baan

Even before Zeitz Mocaa opened last month, dissenting voices were raised. In a 2015 article in Art Africa magazine, the journalist Matthew Blackman wrote an open letter to Mr. Coetzee and Mr. Zeitz, complaining that the collection reflected Mr. Coetzee’s tastes, rather than those of an acquisition committee with rigorous selection criteria.

Another worry, he wrote, is the power of the museum to skew the choices made by local galleries, which he suggested “are developing their stables purely to fit the buying habits of ZMocaa.”

Joost Bosland, a director of the Stevenson Gallery in Cape Town and Johannesburg, which represents Mr. Hlobo, Penny Siopis and Kemang Wa Lehulere (all are in Zeitz Mocaa’s collection) wrote in an email that while there was a basis of truth to this criticism, it was hard to predict what the new museum’s influence would be on the market for African art until its acquisition budget was known. “However, the best African artists have a deep, global collector base, and it is hard to imagine a single actor determining the direction of their market.”

Most artists and gallerists contacted for this article were reluctant to voice their reservations about the museum on record, saying that they had too much at stake. “Artists are criticizing it privately, but saying, how do I get my work into the museum?” said Sue Williamson, a Cape Town-based artist who is currently part of a group show at Axis Gallery in New York.

Mr. Coetzee said he and Mr. Zeitz had consulted “extensively” with museum curators around the world while building their collection and had tried to put protocols in place as fast as possible. “We have boards of trustees and advisers, governance boards, 20 curators on staff, and two acquisition committees.” He added, “Do I have influence? I hope so. But I don’t have a final say over what should be bought.”

Even where the issues simmer, however, reaction has so far been largely positive. “I put the criticisms down to a very reductive identity politics,” said Ashraf Jamal, the former editor of Art Africamagazine, referring to a tendency for Afro-centric art fairs to emphasize black empowerment rather than focus on the quality of the work.

“It’s an international museum, it’s not a provincial or national concern, but people lose sight of that,” Mr. Jamal added. “Right now, the collection needs more painting and more sculpture; it’s dominated by photography and video art, but this is such a young initiative. It’s a major phenomenon globally, and a heartfelt attempt to place the African aesthetic on the global stage.”